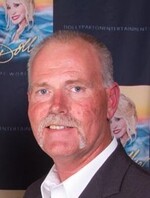 Todd Thomas Poche’, 52, passed away after a four year battle with cancer on February 19, 2021.
Services for Todd will be held on Saturday, February 27, 2021 at 12:00PM in the Chapel of Gallagher Funeral Home with Reverend Carl Beard officiating. The visitation will be held from 10:00AM until the time of service.

Todd was born on January 2, 1969 in Alexandria, Louisiana where he lived for the majority of his life. He graduated from Pineville High School in 1986 and then graduated from UTI in Houston, Texas. He served fifteen years as a Corporal at the Rapides Parish Sheriff’s’ Office. Following his tenure at RPSO, he worked as a US Air Marshal, Overseas Contractor, and Executive Protection Specialist.

He was preceded in death by his grandparents J.V. (Ezel) Poche’, grandfather Williard Evans; and his father’s Thomas Jerry Poche’ and Johnny Lee Steed.