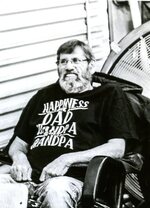 Memorial services for Mr. John Earnest Swanson will be held at Pleasant Hill Baptist Church, Pollock, La, on Sunday, February, 21, 2021 with visitation beginning at 1:30 pm until time of service at 3:30 pm with Rev. Micah Murrel officiating. Arrangements for Mr. Swanson have been entrusted to Gallagher Funeral Home & Crematory.

John is a graduate of Sabine High School. After graduating from high school, he briefly attended Kilgore College and was a member of the stage band, playing drums. His work career began at a service station, which led him to a career in the oilfield. John worked for 19+ years offshore. After retiring from Chevron, he began his career as a millwright, traveling all over the east coast. During their travels, he & Linda met many good friends, and he was able to continue his love of playing the drums, playing in bands along the way.

John’s greatest enjoyment was playing his drums, NASCAR, tinkering with old vehicles, spending time with family and friends and his grand & great-grandchildren.

John is preceded in death by his parents, Bob & Sylvia Swanson and mother-in-law, Doris Humphries.

John is survived by his wife, Linda Humphries Swanson. Two sons; Charles and wife Tonya, of Texarkana, AR and James and wife Melani, of Colfax. His brother, Ronald and wife Dana, of Flint, Tx. His father in law, Leon Humphries, of Colfax. His 9 grandchildren; Dalton, Trevor, Blake, Zakary, Nicholas, Mya, Kolton, Marissa and Hannah. And 11 great-grandchildren.

In lieu of flowers, the family asks that you make donations to Pleasant Hill Baptist Church.