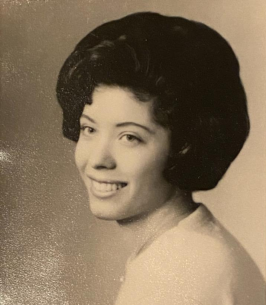 Joanne Marie Fogleman, loving wife, mother, grandmother and great grandmother, born in 1946 in Brooklyn Center Minnesota, passed away on Tuesday, June 21st at Saint Francis Cabrini hospital is Alexandria, Louisiana. Joanna was married for 56 years to her soulmate Art, who she met as a pen-pal in her senior year in high school. Art was in Air Force boot camp with Joanne's brother Butch. He saw a picture of her that Butch received in the mail and he was instantly smitten. he asked Butch for permission to write her. And a little over 2 years later, they were engaged.

They were married in 1966 and spent their honeymoon separately thanks to the Vietnam War. They moved up their wedding date because Art was being deployed for a 1-year tour of duty.

Joanne was a military wife, which meant relocating frequently to new duty stations in Europe and across the United States. Art served 20 years and retired from the Air Force in 1982. Throughout his long enlistment, Joanne was forced to become a strong independent woman, who spent periods of time raising 3 boys alone while Art was deployed on TFY for up to a year.

Joanne was a wonderful, loving, nurturing mother. She loved music, especially Elvis Presley. She was also an avid reader. Joanne had a caring heart and supported numerous charitable organizations, especially those that involved children, animals, veterans, all for which she cared deeply.

Joanne is preceded in death by her parents ,Al and Anna; her brother, "Butch"; her sister, Ellie. Now they have all been reunited in God's kingdom. She will be missed by her loving husband, three sons, three daughter-in-law, seven grandchildren, an infant great-granddaughter, several generations of nieces and nephews, and Lucy.

Joanne asked that she be cremated, and the family has honored her last wishes. Her ashes will be returned to the earth in one of her favorite places in Colorado, where her mother's ashes were spread decades ago. May she forever rest in peace.