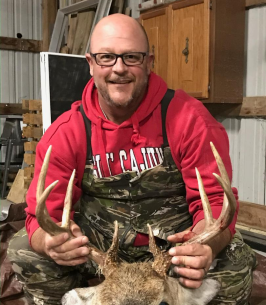 Visitation will be Wednesday, July 6, from 4-8 p.m. at Kinsley Mortuary. The family will receive friends from 5-7 p.m.

Burial will follow in the Oak Grove Baptist Cemetery near Bentley, LA.

A memorial service will be held at 10:30 a.m., Wednesday, July 20 at Marysville Christian Fellowship in Marysville.

Jamie was born March 23, 1971, Alexandria, LA, to Bonnie and Kenneth Walker. He graduated from Louisiana Tech University with a degree in forestry. In 2013, he moved to Kansas.

On November 22, 2019, he married Susan Zutterman Pacha at Marysville, KS.

He was an avid hunter, loved college football, baseball, and anything LSU. Jamie enjoyed meeting new people and sharing stories or giving advice. He was wise beyond his years. Jamie enjoyed working on deer stands and comparing deer pictures from trail cams with hunting buds.

Jamie worked as an independent forester for 25 years and later became a Special Agent for Catastrophe Sites with State Farm Insurance.

A memorial fund has been established and will be designated later. Contributions may be sent in care of Kinsley Mortuary, 1006 Broadway, Marysville, KS 66508.