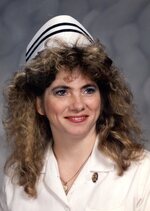 Darla was a loving wife, mother, grandmother, daughter, sister and friend. Darla earned her Associate’s of Science in Nursing from LSUA in December 1993 and practiced as a Registered Nurse in acute care, home health and travel nursing until her illness in 2013. She loved her family and always helped others, even during her years of illness.
Darla was preceded in death by her father, Dell Sydney Durand, Jr., her paternal grandparents, Dell S. Durand and Grace Wilson Durand; her maternal grandparents, Doil D. Garlington, Sr. and Winona Nugent Garlington, her sister, Karen Durand Thompson, and her granddaughter, Haylea Renea Peavy.

Arrangements have been entrusted to Gallagher Funeral Home and Crematory, Ball, Louisiana.